Easy way to make Indian cap/ Gandhi topi/ Nehru cap with A4 size paper.  The Gandhi cap (HINDI: गांधी टोपी) is a white coloured side cap, pointed in front and back and having a wide band. It is made out of KHADI. It takes its name after the Indian leader leader MAHATMA GANDHI , who first popularised its use during the INDIAN INDEPENDENCE movement. Worn commonly by INDIAN INDEPENDENCE activists, 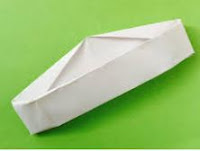